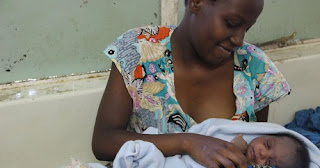 In a country where a premature baby dies every 20 minutes, community-based organisations are leading a shift in perception to breastfeeding – and saving lives

When Patrick McLeod was born prematurely in May, he was just 37cm and 1.2kg in weight. His life hung by a thread. “It was a scary thing, to encounter him so small,” says his mother, Annerleigh Bartlett. “He was so fragile we weren’t sure how to handle him.”

Bartlett, who had undergone an emergency caesarian at 28 weeks pregnant, could not produce milk to feed her baby and his digestive system was not developed enough to receive formula. But there was another way. Patrick began drinking breast milk donated by other women to the Cape Town-based organisation Milk Matters.

He took a millilitre of milk every two hours, continuing on donor milk for a fortnight, until his mother was able to lactate. Patrick, who spent more than two months in intensive care, is now 14 weeks old, 50cm and more than 3kg. “He improved on a daily basis,” recalls Bartlett. “He went from strength to strength. He’s quite feisty.”

Breast milk banks are growing rapidly in South Africa, combating a climate where breastfeeding rates are low, formula is fashionable and a premature baby dies every 20 minutes. The government is introducing the banks at public hospitals, and hopes that a shift in attitudes and mindsets will follow: at present only 8% of South African women exclusively feed their babies breast milk during the first six months of their lives.

It’s a system that existed informally in hospitals around the country before 1980. But the HIV/Aids pandemic put an end to it, and dealt a blow to breastfeeding in general, with HIV-positive mothers warned that they risked passing on the virus to their babies. Instead, the government supplied free formula.

Eventually a new method of pasteurisation ensured that breast milk banks could operate safely again. Fifteen years ago in Durban, Anna Coutsoudis set up South Africa’s first community-based bank with funding from Unicef. “At the beginning I heard nurses asking, how can you bring milk from a white woman for a black baby?” she recalls. “I said, but you’re happy for me to bring milk from a white cow? We don’t get those statements any more.”

But as South Africa’s infant mortality rates remained dismal health officials came to recognise that the benefits of breast milk – packed with nutrients that help build the immune system – far outweighed the risks, and antiretroviral drugs were also significantly reducing the likelihood of HIV transmission. In 2011 the government began champion breastfeeding.

By the middle of next year, KwaZulu-Natal province alone will have 16 milk banks in public hospitals. Coutsoudis says: “There’s been a huge push from the government, which is very exciting.”

Breast Milk Reserve in Johannesburg
Stasha Jordan at the South African Breast Milk Reserve in Johannesburg. Photograph: David Smith
Infant mortality has come down in recent years but there is still a battle of perceptions. “Poor people aspire to have what the rich have, and the rich have always been seen as giving their children formula. It’s your cellphone, your TV, your satellite dish – and formula fits with that. But breastfeeding is common to all women, not just a certain social class. It shouldn’t just be a woman hiding in the corner: it should be aspired to.”

Donated breast milk is not taken from HIV-positive women. Potential donors undergo a health screening and express their milk into sterile jars. It is then tested, pasteurised, refrigerated and distributed. Coutsoudis estimates there are now 2,000-3,000 donors nationwide, giving breast milk for no payment to premature babies who have been abandoned, orphaned or whose mothers are too ill to lactate. “It is rewarding to know you have contributed to another person’s life,” she says.

Coutsoudis assisted with the establishment of Milk Matters in Cape Town and the South African Breast Milk Reserve (SABR) in Johannesburg. At The Media Mills, a cluster of converted industrial buildings, the SABR runs bottles of milk through a pasteuriser and eight freezers. A wall clock notes: “Every drop counts.” The SABR runs 44 milk banks across the country and is expanding fast: last year it fed 1,689 babies, while this year it got to more than 2,800.

But Stasha Jordan, founder of the SABR, warns that the “breast is best” message still has a long way to go. “South Africa takes a very conservative stance on communication around healthcare, or at least a very cryptic one,” she complains. “The government is doing much better but I would love to see a lot more education; I would love my children to come home and say they heard all about breastfeeding today. It’s about normalising breastfeeding.”

Jordan says women donate “for the same reason you donate blood: because you know the life-saving value of it and you’re part of a movement. The ambition is to be like blood banks. We have educated a segment of our population about donating blood and in the same way we can educate women, to grow the breastfeeding industry.”

The message is spreading, though. Khanye Nzama defied her own family to breastfeed her children, then became a regular milk donor in 2012. “I wanted to make a difference,” explains the 32-year-old from Pinetown in KwaZulu-Natal. “In this world you have to give something to make the world better. I decided the best gift of life I could give is my breast milk.”

Back in Cape Town, Bartlett is so grateful for the intervention by Milk Matters that she has turned donor herself, already giving three litres, which fed 20 infants for 24 hours. “It was the least I could do,” she says. “If it wasn’t for organisations like Milk Matters, we might not have a boy today.”
Publié par David Yoshi TANABE à dimanche, septembre 20, 2015